Welcome to My World 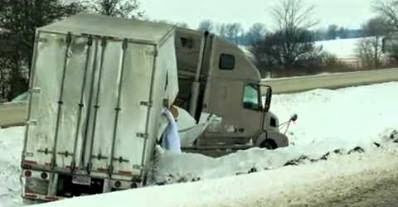 Highway to Hell-Video
This was filmed on the highway that I can see from my house.
It was filmed 3 days after the storm, so imagine what those first 3 days were like.

To say that life has been interesting in my "neck of the woods" lately, is an understatement. We were right in the middle of the Blizzard of 2014. For us, it started last Saturday night. The weather reports were constant and scary. We actually brought our son from his apartment to our house to stay, just so he wouldn't end up trapped alone if all the "bad stuff" actually happened, and it did. Once the snow started, it simply would not stop. In our small town, we had 12.2 inches on top of a few inches already on the ground. That is the most snow I have seen fall since the 70's, but it certainly wasn't the worst of the problems. By Sunday, we had high winds along with the snow and the conditions were a complete white out. We can actually see the junction of two interstates from our back yard and at first, traffic was just moving slowly and we could see cars and trucks spinning and sliding off the road.  Soon, we couldn't see the interstate at all. Reports were coming in of people stranded in their cars and semi-trucks were causing accidents all over the state...and the temperature started dropping.

By Monday morning, our wind chill was -43. Everything in town was closed (except for the power company where my husband works and a few truck stops). There were people still stranded in their cars after 14 hours, they could not be reached by emergency crews and a "no tow truck" order was issued. The semi-trucks that could move on the interstate were trying to get off into our town, which is very much prepared for truckers. We have several truck stops, but every one of them was full. All of the parking lots in town were completely filled with semis, the interstate exits were backed up for miles with semi-trucks and they lined the streets all over town. I have never seen anything like this. Our son works at a factory and it was closed on Monday, but Tuesday morning (wind chill -33) we ventured out to take him to work. The roads in town were icy but it was possible to drive on them. I road along with my husband to see the trucks and it was seriously like being in the Twilight Zone. They were everywhere, hundreds and hundreds of semi-trucks in every space in town and lining all the city streets. The interstate was still solid ice and what little traffic there was, moved slowly if they were moving at all.

We didn't get mail until Wednesday. School has been closed all week. The grocery stores did not get any fresh food until Wednesday and the shelves were emptied by Saturday night. Everything is still snow covered with drifts several feet tall. The roads are still icy and slick but travel is finally getting better. I caught a bad bug on New Year's Eve and was in bed for several days before this happened, so when I finally left my house last night to go to the grocery store...I had been in here 9 days, other than my brief car ride on Tuesday morning. Cabin Fever!!

Amazingly enough, there were no fatal accidents that I have heard of. There were a few power outages, but they were handled fairly quickly and the police, fire, utility and city workers did an amazing job of keeping people safe, warm and fed. Central Illinois is certainly prepared for winter weather, but when you get the heavy snow, high winds and sub-zero temperatures all at once, there is simply no way to keep up with the problems. It has been a very interesting and sometimes frightening week and as things are beginning to melt today...we are all breathing a sigh of relief.

Did the storm get to your house? How is your cabin fever?

Sue, this is just terrifying!

We got freezing temps for two nights, but we have blue skies, Chamber of Commerce weather today.

Wow - Y'all did get it bad!
We dodged the bullet on the snow and ice this time, but the temps were brutal for this area.
Sorry the bug got you. It hit daughter's household abt. a little over a week ago. But theirs was more like a 48 hr. type.
Stay warm and hope you feel better soon.

For some reason I was thinking you lived in Florida, Sue! We had the freezing temps, but only a dusting of snow...and I was sick from right after Christmas, too. I finally went to the grocery on Wednesday.
Hope you are feeling better.

Captivating post!
Hope this arctic weather is already behind you.

Sue...I had no idea at all that it was so bad down there by you. I know how treacherous interstate driving is with blowing snow...there are no barriers. And with ice...OMG. I am sure your town looked surreal. What an experience. I am just so glad to hear there were no fatalities.

I didn't even know you were home from Florida. I will go back to see if you have posted earlier than this. I hope you had a good time. Happy New Year (if I can say that after all of this!).

Wow, Sue, that is horrible. You dad made the right decision to go to Florida! I wish I had done that, and may still do that, I am completely fed up with winter, ours was bad but nothing like this. Now we are warming up but having lots of rain. It is going to be a long miserable winter, and I can't wait for it to be over. xo

Wow! That is unreal! I've lived in Louisiana my entire life so I've never experienced weather even close to that. It was in the 20's several days this week & even got down to 19. That's way too cold! Can't imagine -43! Glad y'all are safe.

Weather can be so frightening at times. We had below zero weather and my daughters had nearly frozen pipes....luckily we were able to open the drywall and get some heat to the area. Today 4 days later...in the upper 50's! Glad your son was able to be at home with you.
xo,
Deb

Just horrible! When we had the recent ice storm, I had cabin fever deluxe. So glad things are slowly improving for you. Hope this doesn't happen again!

Finally got another computer so I can visit now. :)

Amazing. We just got the COLD--it was the coldest it has been in 20 years here in the South where I live!

May need to check into those -would make a nice gift. Kota Bontang, I'd love one to keep in my car. Great idea! 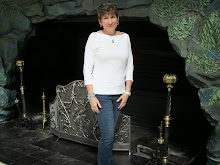